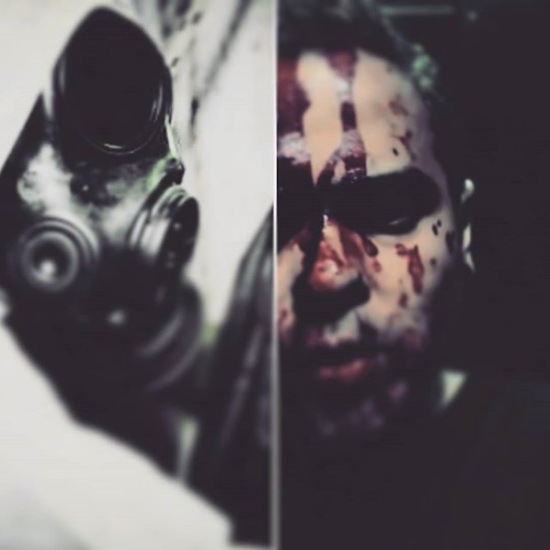 A gloved hand broke the dirt. “It feels like I have been floating alone in the dark. All alone. No voices. No sounds of any kind. I don’t know how long I’ve been here. All I do know, is the man who put me here.”

Blake was back. One year ago, Adrian Marcato brought Heretic to the UK. A dark, twisted version of himself, bringing death and destruction. Corroded, nihilistic, an idea that should never have been thought up, staring over us with cold nothing in his eyes. A hellish tug of war, between Blake and Adrian, but also within Adrian, as he tried to overcome the darkness that was devouring him. Hours of struggle eventually ended with whoever was left, caked in dirt and blood, grieving over Blake’s final resting place. Now, here we stand. A dirt road, cutting through a field of darkness. Car wrecks litter the domain, white-clad figures standing menacingly on the hoods. The cold is tearing at our clothes. It is here we meet again. That same entity, still feeling nothing, uncaring, giggling at the prospect of what we were about to go through.

Cut the theatrics. What followed was brutal. Utterly brutal. A fist hammered into my stomach, in an instant, I was lifted overhead and smacked into the gravel. Again. And again. Screams erupt all around me. “Anyone can do this. This is my show now.” People are coughing up liquids, hopeless pleas, victims sobbing in pain – please stop. Hands covering my face, splattered red as I spit out blood. Adrian grins maniacally, a weird glaze over his eyes. I don’t know who this is. Unhinged. Out of control. Sitting on top of me, he is choked, and begs for his assailant to go harder. You are me now. Change roles. Tell him what to do. A belt wraps around my neck and I fall into black nothing.

Smooth jazz music. Blake’s calm, mathematical approach is a safe haven, probably for the first time. I look into the eyes of the person in front of me – and I see fear. Not staged fear, there was no mistaking that look. Something primal. The look people have after they have been chased through the woods by something vicious. I’m pretty sure I had that same look in my eyes. Blake, upon his reappearance, had embraced Adrian. Student and mentor, reunited, the axe, buried. But he knows. Blake gave me a mission, and I was bound to complete it. Even as dripping cloth bags were duct taped around people’s necks, even as they were screaming in panic – soaked and shivering, I was on Blake’s side. I am Blake.

I barely remember how that evening went. I remember trembling, my knees covered in layers of dirt and gravel, lying down, plyers biting down on my tendons. I remember heavy guitar music droning through the night. I remember blood, dripping down from my face, sticking my eyelids shut, this red goo, distorting my surroundings. I mostly remember it didn’t make sense to me. Confusion washed over me, frustration, even. It did not feel right. It didn’t feel right at all. Even as I pushed my bloody face into Adrian’s, even as I released my grip around his throat and closed his eyes with filthy, crimson fingers. Even as I lay down next to Blake and gazed at the stars. They didn’t hold any answers.

At night, my brain was a whirlpool of thoughts. The events kept spinning through my head – and I couldn’t believe that it had been so violent, so conceptless. Unprepared, chaotic, random acts of brutality interspersed with bits of nihilistic monologue. Until it hit me.

This same routine, this boring, old sequence of things I need to do, it is killing me. I am dead inside.

This dark version of Adrian and those who follow him, the ooze that was left behind after he was forgiven and set free by his friend, the deteriorated shadow that shot Blake through the head – did he now put a flame to the idea and the reputation of Heretic?

A blink, and I am back. This is hell – Adrian’s hell, occupied by all the demons residing in his head. A smoky haze, encompassing everything, a distorted voice crying out over the mayhem. I’m tied to the wall, brutalized by gargantuan monsters, with fire ever burning closer. My vision blurs, white hot pain as assailants strike from the dark. A boot stomps down, I’m retching, falling down to my knees. You keep coming back, and I am so sick of you. Hands force me to commit atrocities to others, and it does nothing to me. Here in this hell, have I become dead inside myself? Again and again and again. He suffers as we suffer. A moment of calm, as Adrian atones, recounts the doleful events that brought him here. A bereaved crowd, heads bent down, as the voice begins to deform and contort. And then it all happens again.

Blake is present in Adrian’s hell as well. Of course. Freshly responsible for Adrian’s demise, the enigma that is Blake puts us through his tests, through his games. Distant, uncaring, ever precise. His gaze piercing your soul as his mask reflects your image right back at you. It’s here that people fall, tonight. A smell, so thick you could cut it, permeating everything, makes this vision of hell even more real. Muscle fibers quivering under the strain. Drops of sweat trickling down my face as time becomes abstract and meaningless.

Then, I’m sitting on the floor in this inferno. A place for the condemned. I’m left alone as everyone surrounding me suffers. Looking around, wide eyed, this place where I find myself feels surreal. A dim, blue light is circling me. All around me are plastic cocoons, breathing, slowly, expanding and deflating again, barely visible in the dense fog. It’s terrifying, but I am perplexed. It’s beautiful, dreamlike. Undeniably, it’s hell, but, spellbinding, captivating. I’m unable to look away. Then, an angelic presence takes me away. Adrian. Not this dark leftover empty shell, but his true self. He asks me how I am feeling, what happened to us the night before. Offers me the chance to revolt, to trust him. Tonight, I choose to stand by his side.

I had been here before. Treacherous hands close around his throat. Everyone is chanting, and Blake seems feverous. This isn’t his composed self. A condemned version of Blake, encouraging the crowd to chant his name, ever louder. Affected by the hell he finds himself in, carried away by the passion of revenge. I am Blake. I am Blake. I am Blake.

One last swallow, as I prepare to meet their wrath. Tonight, I am Adrian.

Only darkness remains. A lifeless body, dragged away. Blake, exhausted, leaving us behind. Left alone in smoke.

“You may kill him, but you may never judge him.”

These two nights messed my head up for days. Night one was an excruciating, vicious chaos. I’ll never know for sure how much of this was intentional, but I choose to believe a good part of it was. If you want your show delivered in easy, bite sized pieces, Heretic might not be what you want to seek out. It’s better to destroy, than to create what is meaningless – and Adrian taught us meaning by creating something so nihilistic and violent it ended up pissing people off, including me. The realization of what it might have meant gave me chills, and it still does. Looking back, I wouldn’t have missed it for the world, even though it scared the hell out of me. As a statement, it couldn’t have been more strong. The next day ran like a freight train, similar to last year’s Cracked vs Heretic. A horrible rendition of Adrian’s hell, running without a hitch, the two houses showing off their strengths through beautiful visuals, distorted soundscapes, punishing scenes and poignant monologues. A meta quality running through the show, me, being confronted with my own continuous return to their shows and my critiques about the previous night. It kicked my feet right from under me. Every time I thought I got a grasp on the whole, they turned everything upside down again. The final picture is a very bitter one, told through heartbreaking honesty. This was bare as bones, once the dust settled. As people were hugging each other after the show, excited about having survived, I only felt an emptiness. We were given a glimpse of a broken psyche, someone who’s sick of torturing, but who doesn’t want to let people down. Someone who gives his all, but whose artistry remains largely unrecognized. It broke my heart. Heretic is slowly killing its creator, and we are all encouraging this, shouting for more. This hell, these tormenting demons, it all got way too real.

I am so, so sorry for everything.

For more thoughts about these two nights – here are some more words I wrote for Haunting.net.